Javonet 1.5 Released – Open for .NET developers and even more for Java! 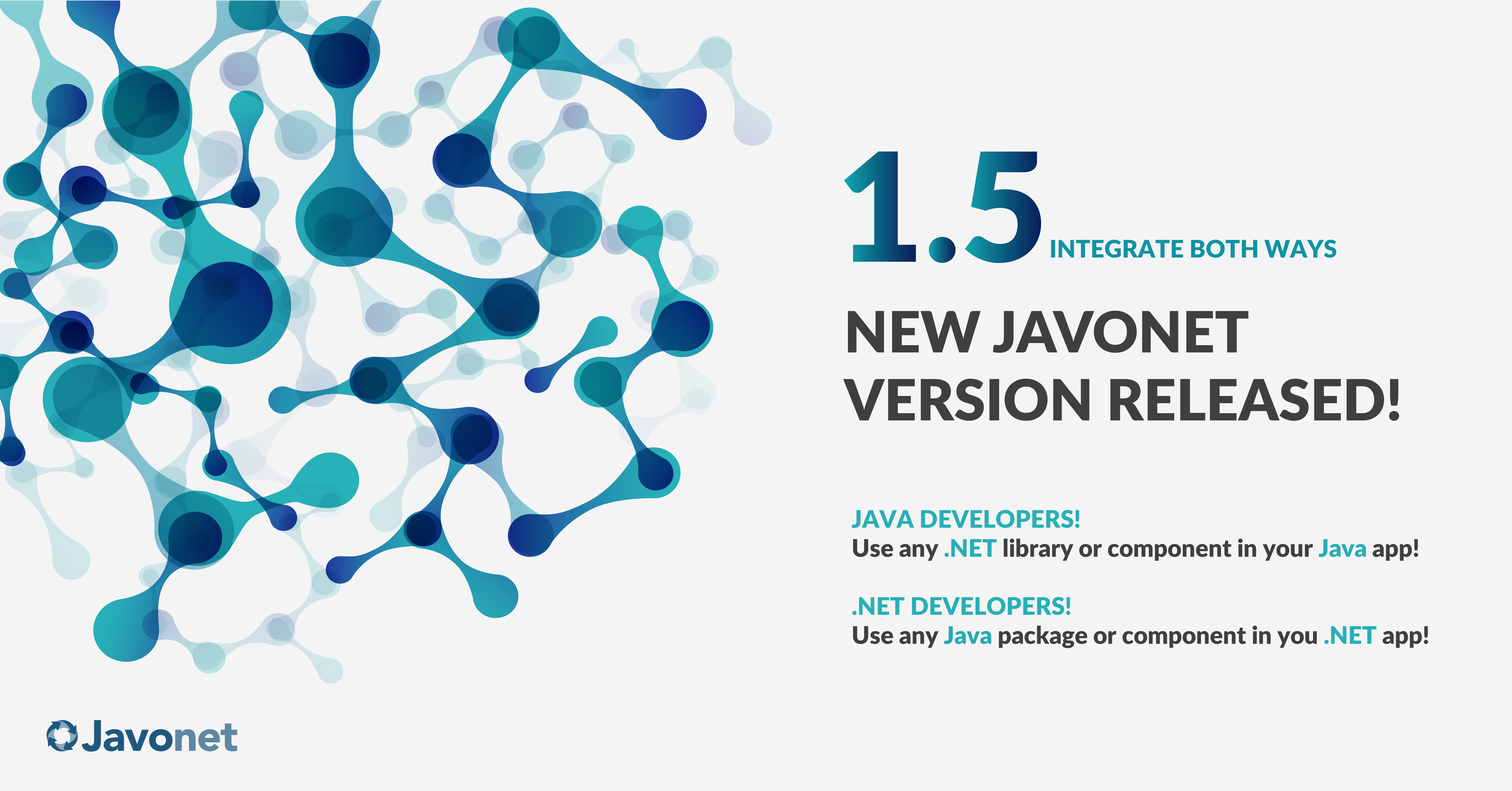 After months of intensive work and close cooperation with many of our customers we have finalized the latest Javonet release. This release provides a lot of improvements for Java developers and includes completely new product for opposite direction dedicated for .NET developers. Read more to learn details about each change applied in latest Javonet.

With that release the biggest change that comes is the support for .NET developers who want to use Java packages in .NET desktop, web or service application.

It is now possible to load any JAR file from .NET application and utilize the classes, objects, types, methods and logic stored in those packages.

The Javonet for .NET developers supports a lot of the features that we provide for Java developers which include:

We continue works on this release so feel free to share with us what is most important for you and we will cover that with higher priority.

You can download Javonet for .NET developers by signing up for 30 days free trial:

The Javonet for Java developers is utilized around the world by more than 1500 companies and develops at amazing pace with all the feedback and scale effect compound experience from all our users.

Some of the key changes:

As our unified backend and UI components revolution speeds up we put a lot of efforts into the Javonet modules responsible for embedding and exposing existing .NET WPF and WinForms user controls and back-end components like Image recognition, barcodes, 3d modelling and much more to Java developers.

The key focus is to make sharing any .NET components with Java developers a seamless experience without any compromises. The components must work, look and perform the same way as they do in .NET. Also, we focus on assuring that the exposure through strongly typed interfaces is painless and efficient.

The changes implemented in this field:

To provide seamless and pure Java experience and get most of the Java market for existing components it is crucial te create strongly typed wrappers. It means to reproduce the existing .NET interfaces using plain Java objects with the same method signatures. With that in place Java developers use .NET components as if they were native Java components. Therefore, it was important for us to apply also more improvements in this area.

Some of the key requirements of our customers is to make sure that Javonet will not block the deployment or execution of their applications. Therefore, we have shifted our entire activation infrastructure into the new load balanced environment on Microsoft Azure with design focused on High Availability and distributed geo localization.

We also made it possible to specify activation relay servers that can be used within environments with highly restrictive security rules. In such case the intermediate server with custom domain name can be specified which will be used by Javonet to route the activation calls that will be further forwarded to Javonet activation servers.

Also, further improvements were applied in terms of activation only at compile time that is currently possible as an option for Javonet Professional and Javonet Enterprise licenses.